NASA and the ISS astronauts also use modern technology to lend a hand while staying in the space station, and that is with AR (augmented reality) and VR (virtual reality) technology. Astronauts have been using them for quite some time now, and this is intended to make their stay in the ISS easier and to help them with their tasks.

The International Space Station is a haven where all the countries of Earth come together, study, and perform their supposed tasks while orbiting the planet several times a day. Previously, NASA has mentioned that technologies such as the Microsoft Holo Lens have been used in space, something they have used for space station repairs.

Astronauts on the International Space Station have a long history of using augmented reality and virtual reality, and NASA says this is extremely useful in providing people in space with the assistance they need. From repair needs to various experiments and research, these glasses have helped to further integrate scientists into their work and goals.

Not only was it used for work, research and recreation, but the technology was there to film the daily lives of these astronauts as part of the â€œISS Experience,â€ a virtual reality experience that would simulate events.

On Earth, augmented reality and virtual reality can be more focused on leisure activities and entertainment, and that’s because humans can afford it, because they have the time and space to do it. The International Space Station is known to be locked in a confined area, and astronauts need to be precise in everything they do as it could be potentially dangerous.

That said, AR and VR are also used with caution and practiced with the strictest possible safety guidelines to continue with their daily lives.

AR and VR in space 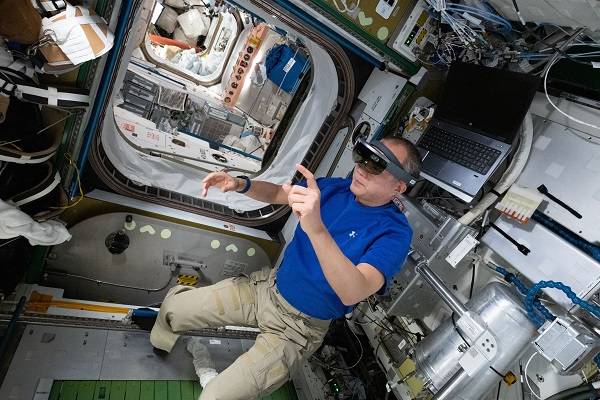 AR and VR in space are extremely useful, and this is because there are properties or characteristics of these glasses that help to solve everyday problems, even the most complex ones.

AR and VR technology is used by several astronauts like Scott Kelly, Megan McArthur and Soichi Noguchi to fix several space station needs. Additionally, other astronauts have used it to simulate a “time travel” experience, something which is a concept of space and time that suits the sky.

Researchers and astronauts have mainly focused on finding new things that humans need to know and study, especially since this is a different experience in the cosmos.

Should AR, VR be developed in space?

AR and VR should be developed for space, and this is something that needs to be done urgently, as the space race is advancing rapidly. Space tourism may soon be a thing, and augmented reality or virtual reality can help prepare them for what to do, expect, or feel when in the sky.

Associated article: NASA’s James Webb Telescope Medium and Near Infrared Technology to Capture Better Images Than Hubble, Spitzer: What Makes It So Different?