Cislunar space is the region beyond Earth’s orbit to the Moon. (Photo: NASA)

WASHINGTON — A new White House strategy for interagency research on cislunar space Activities include Space Force’s three development priorities for operating in the vast region between Earth’s orbit and that of the Moon: spacecraft and space debris monitoring, communications and positioning, navigation and timing (PNT).

“The coming decade is critically important for the exploration of cislunar space, including the lunar surface,” the White House said in a statement. fact sheet support the strategy. “NASA estimates that over the next ten years, human activity in cislunar space will equal or exceed anything that has occurred in this region since the start of the space age in 1957.”

The strategy was developed by an interagency subcommittee of the Office of Technology and Policy National Council for Science and Technology. This council is responsible for coordinating research between federal agencies and ensuring that efforts are directed at White House policy goals.

Subcommittee members included the Departments of Defense, Commerce (via the Office of Space Commerce), Energy, and State, as well as NASA, the National Science Foundation, and the U.S. Geological Survey. Participants from the executive branch included representatives from the National Security Council, National Space Council, Office of Management and Budget, and OSTP. It was chaired by OSTP Deputy Director Matthew Daniels. 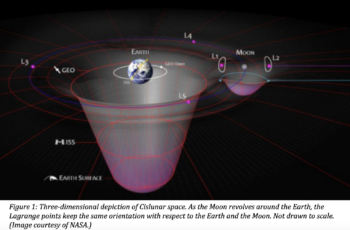 The subcommittee defines cislunar space as “the three-dimensional volume of space beyond Earth’s geosynchronous orbit that is primarily under the gravitational influence of Earth and/or the Moon.” This includes Earth-Moon Lagrange points, spacecraft trajectories to use these regions, and the lunar surface, the document adds.

Earth-Moon Lagrange points, the strategy explains, “are places in space where an object will keep the same position relative to the Earth and the Moon. The Earth-Moon system contains five Lagrange points (L1-L5). Spacecraft placed in the regions around the Lagrange points will require little or no propulsion to maintain their position.

As for the lunar surface, the document notes in particular the interest of research to exploit the unique properties of the far side of the Moon, what it calls the “protected zone of the Moon (SZM)”. This surface, and the orbits adjacent to it, are inherently shielded from radio interference from Earth. “This area may allow radio astronomy observations that are not possible anywhere else,” the document notes.

Enable long-term growth in cislunar space. “Opportunities for research and development in Cislunar space range from new discoveries in space science to the development of new Cislunar technologies to new breakthroughs in understanding the effects of the space environment on humans,” the document states. .

Develop international scientific and technological cooperation. The document notes that international cooperation “can foster peace, develop responsible practices, and create the foundations for new institutions that enable a sustainable human and robotic presence” in cislunar space.

Implement communications and PNT capabilities. The paper highlights the need for “scalable and interoperable approaches” that can help “enable new commercial developments and reduce barriers to entry while advancing responsible and safe spaceflight practices.” The strategy also commits US government departments and agencies to leverage and promote “the use of commercial services” in cislunar space.

Expand U.S. space situational awareness capabilities. “Space Situational Awareness is the foundation necessary to enable transparency and security of operations for all entities operating in Cislunar space. As activities in Cislunar space increase, the U.S. government will define requirements for new space situational awareness capabilities, including associated reference systems and data sharing approaches. … This objective has synergies with efforts to provide early warning for potentially dangerous asteroids,” the document states. 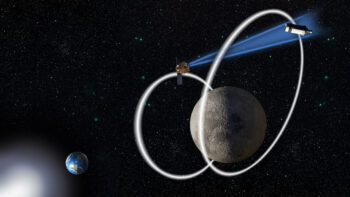 The Air Force Research Laboratory (AFRL) has additionally been working on a demonstration effort of detecting and tracking space objects in the region of the Moon, with a satellite prototype project called to the origin the Cislunar Highway Patrol Satellite (CHPS). AFRL November 10 announced that the project had been renamed Oracle, named after the ancient Greek soothsayer deity of Delphi, and that it had awarded a $72 million contract to Colorado startup Advanced Space LLC and its partner Terran Orbital who manufactures the satellite. Advanced Space also operates NASA’s Cislunar Autonomous Positioning System Technology Operations and Navigation Experiment (CAPSTONE) launched in June as part of the agency’s Artemis human space exploration program.